Nothing beats sinking your teeth into a juicy, pink-fleshed, succulent pork chop. The feeling is exhilarating, for lack of better words.

Before factory-farmed pork, most of the meats produced by pig farmers were from old-fashioned breeds. Pork from these old breeds tasted better and had more flavor.

Many of these heritage pig breeds are making a comeback. Of course, they are returning with their flavorful and better-tasting pork.

Berkshire pigs have pink ears, short legs, and short snouts with upturned noses. Their faces are dish-shaped, and their jaws are large.

Berkshire pigs are medium-sized animals that grow relatively fast. It usually takes around 180-195 days after birth for a Berkshire pig to reach the market weight of about 249 pounds.

On average, a mature Berkshire pig can weigh around 595 pounds, with boars being much heavier than sows.

Berkshire pigs are hardy, intelligent animals that are ideal for an extensive pig farming system. These pigs are prized for the quality of meat they produce.

The meat from a Berkshire pig is pink-hued, tender, succulent, marbled, juicy, and flavorful. It is also quite popular with Japanese chefs.

Ossabaw Island hogs are domestic pig breeds from the feral pig population on Ossabow Island. Members of this breed are descendants of the pigs left on the island by Spanish explorers in the 16th century.

Ossabaw Island hogs appear in a variety of colors, but the most common color is black. There is also a spotted variety.

Unlike other pig breeds, Ossabaw Island hogs have a heavy coat of bristles. Also, their snouts are long and their ears are upright.

Ossabaw Island hogs are hardy and active animals. They are excellent foragers and are ideal for an extensive pig farming system.

The meat gotten from the Ossabaw Island pig is dark and has a unique texture. It is considered artisanal and is ideal for whole pig roasts, pork, and cured meats.

The Choctaw is a rare domestic pig breed. It descended from the pigs brought into America by Spanish explorers. Choctaw pigs are mainly black with occasional white markings,

The Choctaw pig possesses two distinctive characteristics: fleshy wattles and toes. Their toes are usually fused to form a hoof, and their ears are either erect or slightly drooping.

Choctaw pigs are small-sized animals. On average, a mature Choctaw boar can weigh around 242-300 pounds. Mature sows weigh an average of 149-198 pounds.

Choctaw pigs are hardy and active pig breeds. They are also ideal for extensive pig farming and thrive in free-range.

Since they can forage for their own food, these pigs require minimal care. Their diet consists mainly of berries, acorns, vegetables, and roots.

The Duroc is a pig breed that was developed in the United States during the early 1800s. Duroc pigs are muscular and are usually large-framed. They are hardy, and their muscles grow pretty fast.

Duroc pigs are usually orange-brown. However, their color can range from a deep mahogany-red to a light golden shade. The ears of a Duroc pig are usually drooping, not erect.

In the past, these pigs were heavier than they are today; modern Duroc pigs are medium-sized animals with slightly dished faces and long bodies.

Duroc pigs are not aggressive and are generally calm. They are also ideal for extensive pig farming and can thrive in both warm and cold climates. The meat obtained from a Duroc pig is usually lean but flavorful and well-marbled.

Gloucestershire Old Spots are usually white with black spots. At least one black spot on the body of a registerable breeding pig is necessary for acceptance.

Gloucestershire Old Spots have long heads with slightly concave noses. Their ears are floppy, and when the pigs are mature, the ears may cover their face.

Gloucestershire Old Spots have slender shoulders with sturdy and straight legs. Mature boars can weigh as much as 560 pounds, while sows weigh around 500 pounds.

Gloucestershire Old Spots are a hardy, docile, and intelligent pig breed. They are ideal for both extensive and intensive pig farming systems.

Gloucestershire Old Spots are also prized for the quality meat they produce. The pork obtained from this pig is well-marbled, sweet-tasting, and flavorful.

Also known as the Red Wattle hog, the Red Wattle pig is a domestic pig breed indigenous to the United States. It gets its name from its red color and unique tassels and wattles.

Although Red Wattle pigs appear in different shades of red, they also appear in black.

Red Wattle pigs are large-sized animals that mature quickly. On average, a mature Red Wattle boar can weigh around 750 pounds, while a mature sow can weigh 548 pounds. The average height of this pig breed is about 3.9 feet.

Red Wattle pigs are hardy animals and excellent foragers. They are also mild-tempered and disease-resistant. The meat obtained from Red Wattle pigs is lean, fine-textured, and luscious.

Hampshire pigs are a medium-sized domestic pig breed that originated in the United Kingdom. You can easily distinguish Hampshire pigs with their black bodies and erect ears.

Hampshire pigs are strong with slightly dished faces, long noses, and legs. They also have a white stripe around their shoulders, which can cover their front legs. Their backs are either straight or slightly arched.

On average, a mature Hampshire boar can weigh around 661 pounds, while mature sows can weigh 570 pounds.

Hampshire pigs are known for being fast growers. Plus, they are hardy and docile.

They are also ideal for meat production. The pork obtained from a Hampshire pig is mild, lean, and has minimal back fat.

Kunekune pigs are a domestic pig breed introduced by traders and whalers into New Zealand in the 19th century. In the Maori language, the word Kunekune means fat and round.

Kunekunes are hairy, and they come in various colors. Some of these colors are white, black, gold-tip, ginger, brown, and cream. Tricolored and spotted varieties are also available.

Kunekune pigs have black, medium-to-short snouts and pricked or semi-lopped ears. Their bodies are short and round. They also have short legs with two tassels under their chins.

Kunekune pigs are small-sized animals and are considered one of the tiniest pig breeds. A fully grown Kunekune can weigh anywhere between 152-440 pounds while standing at around 2 feet.

Due to their docile and friendly nature, most people often keep Kunekune pigs as pets. The meat obtained from a Kunekune pig is more succulent and tastier than other commercially grown pig breeds.

Large Black pigs are also known as Devon, Boggu, and Cornwall Black. They are indigenous to the United Kingdom, specifically Essex, Cornwall, and Devon.

As the name suggests, Large Black pigs are black, and they are the only British pig breed that is completely black. Their bodies are long and thick, with long tails and noses.

Their hair is also long, protecting them from sunburn during the summer in warm climates. Large Black pigs have large, flat, drooping ears that may interfere with their vision.

Large Black pigs are raised mainly for meat production. The meat obtained from this pig is lean, tasty, nicely marbled, flavorful, and has no extra back fat. 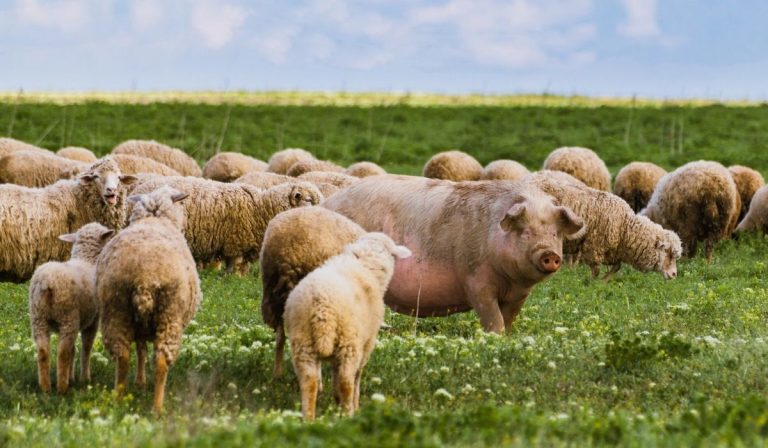 *This post may have affiliate links, which means I may receive commissions if you choose to purchase through links I provide (at no extra cost to you). As an Amazon Associate I earn from qualifying purchases. Please read my disclaimer for additional details.. Raising pigs on a small farm takes a little work, but the… 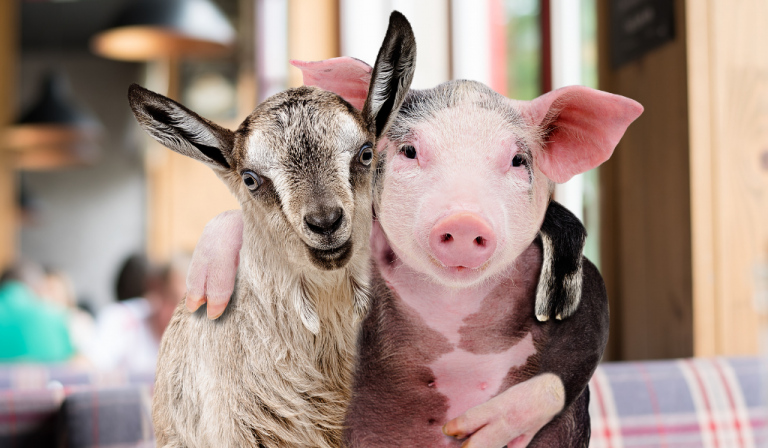 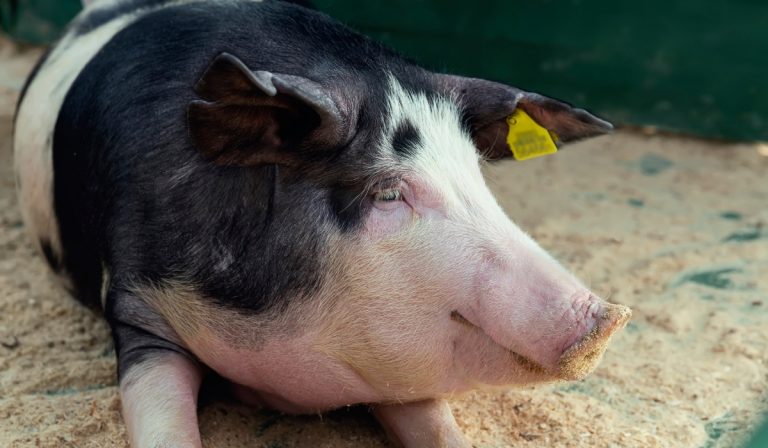 *This post may have affiliate links, which means I may receive commissions if you choose to purchase through links I provide (at no extra cost to you). As an Amazon Associate I earn from qualifying purchases. Please read my disclaimer for additional details.. Pigs have become one of the most important livestock in human lives…. 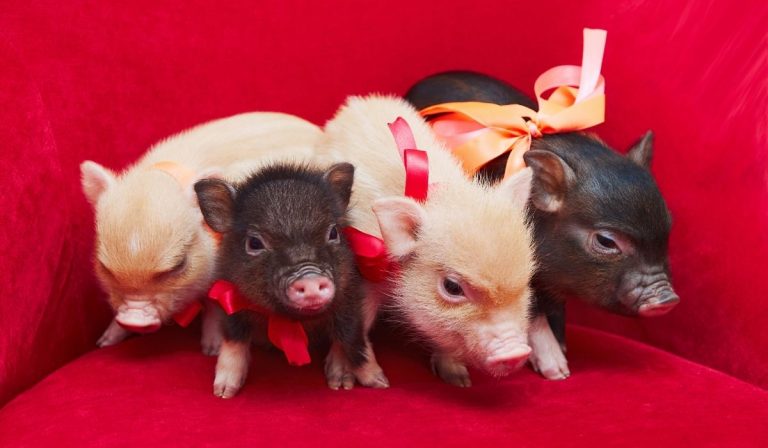 *This post may have affiliate links, which means I may receive commissions if you choose to purchase through links I provide (at no extra cost to you). As an Amazon Associate I earn from qualifying purchases. Please read my disclaimer for additional details.. In many cases, the smallest pig breeds are kept as pets. However,… 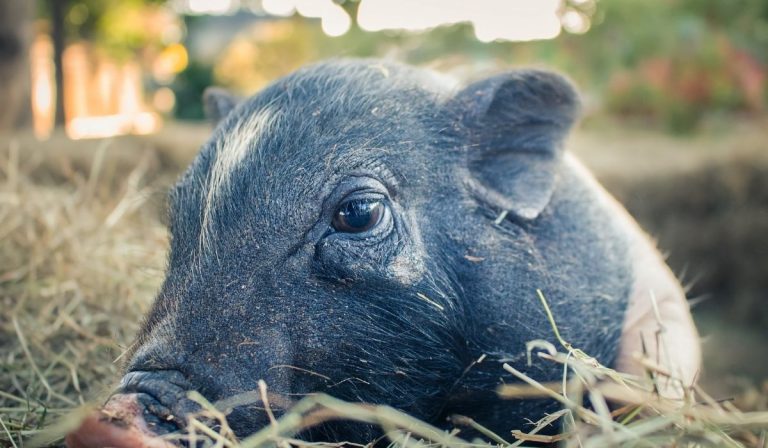 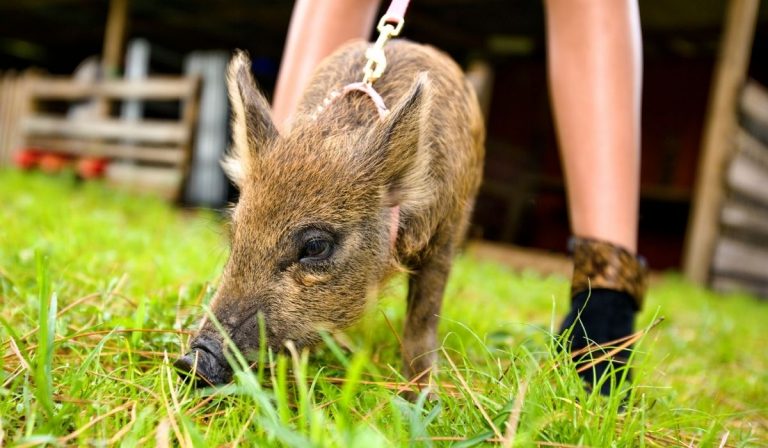