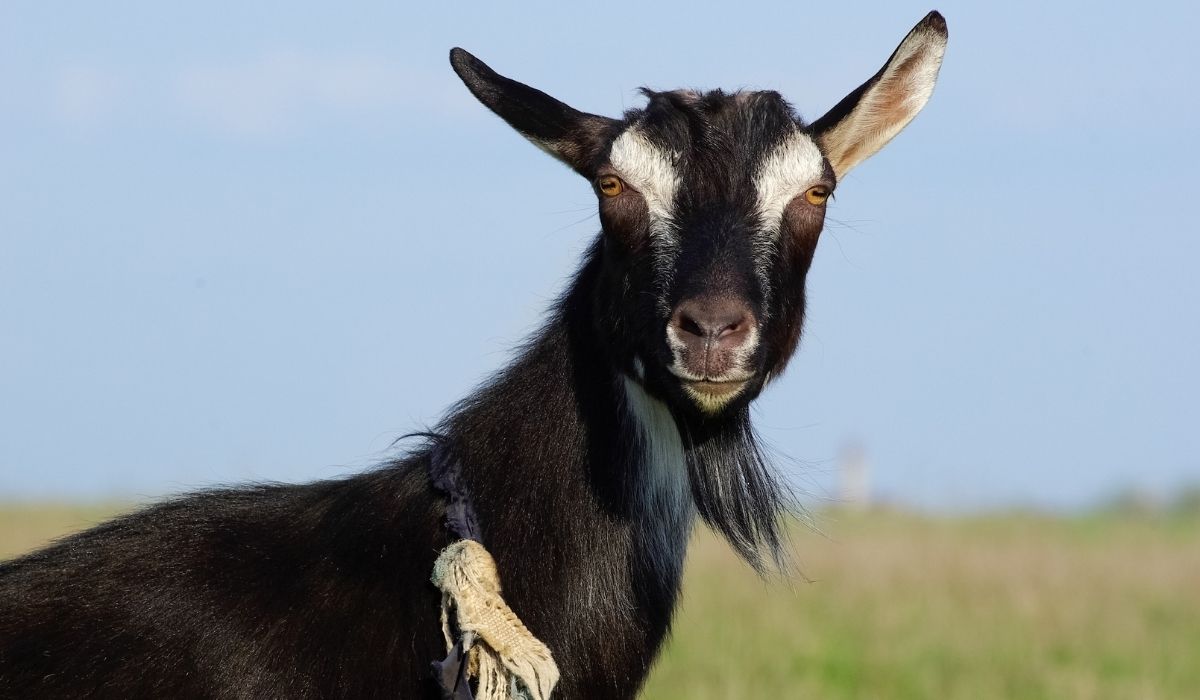 Alongside white, black is the most common color goats come in. Whether solid-colored or patterned, it is not hard to come by a black goat.

But if somehow, you have not come across a black goat before, we’ve got you covered.

In this article, we examine 11 black goat breeds. We talk about their origins, uses, size, and more.

The Anatolian Black Goat is a Syrian-type goat raised in Turkey.

These goats have coats of flat, coarse, and long hair. They come in various colors, including black, brown, pied, and grey.

Anatolian Black goats have large drooping ears and small heads. The bucks are horned, while the does are hornless.

Generally, Anatolian Black Goats are disease-resistant, and they do well even in unfavorable environments.

Goats of this breed are mainly bred for meat and wool, and they have a wool yield higher than many other varieties.

Since their milk yield is minimal, Anatolian Black goats are not typically kept for dairy purposes.

Alpine Goats are natives of the renowned European mountains, The Alps.

Since goats of this breed have positive milk indicators, they thrive as dairy animals.

For one, they can sustain the production of high volumes of milk over a long period. Apart from that, their milk has remarkable butterfat and protein content.

Alpine goats fall within the medium or large range.

Their coats come in various colors, including black, brown, and grey.

There are various varieties of Alpine Goats, but the French Alpine is dubbed the original. Other variants include Swiss Alpine, Rock Alpine, American Alpine, and British Alpine.

As said before, they are used for dairy purposes. But since they are open and curious, they may also be kept for ornamental purposes.

The Arapawa goat was named after its origin – the island of Arapaoa, New Zealand.

This breed is small to medium-sized, with an average weight of 60 to 125 pounds. The does usually fall at the lower margin of this range, weighing 60-80 pounds and the bucks at the upper part of the range at 125 pounds.

The coat of an Arapawa goat is typically black, white, or brown, and it can be solid or patterned. Also, the bucks are horned, while the does are polled.

Arapawa goats are feral. But they may also be kept domestically. They are friendly, easy to handle, and easy to raise.

Arapawa goats are rare, with a population of just around 300-500 worldwide.

Australian Miniature goats are native to Australia. While Sue Ludwig bred them for many years, they only became recognized in February 2000.

An ideal Australian Miniature doe should be as tall as 22 inches, while the bucks should be at least 23 inches. Their coats come in various colors and patterns, including black.

Since Australian Miniature goats have feral and pedigree lineage, they are pretty hardy.

If kept healthy, they can live for as long as 20 years.

Some members of this breed are born with deformities however, these types are not used for breeding. Depending on how bad their situation is, they may be used for other purposes.

Australian Miniatures are low-maintenance. They do not need too much feed as long as enough bush and grass are at their disposal.

They are often kept as pets, but they may also be used for vegetation control.

This breed was created from a crossing between a Nubian goat and a Pygmy goat in 1985.

Kinder goats are bred for milk and meat. The butterfat content of their milk is pretty high – reaching over 7% sometimes and the milk also has a lot of milk solids. These features make it suitable for cheese production.

Kinder Does are prolific. They breed year-round, and they typically have multiple births. It is not uncommon to find triplet, quad, or even quintuplet births.

The coat of Kinder goats is short, and it comes in various colors, including black, brown, white, and many more.

The Nigora Goat is another American breed. It was developed in the early 1990s from a crossing between White Angora Does and Nigerian Dwarf Bucks.

The lineage started with Nigerian Dwarf and White Angora bloodlines. But these days, some may contain Swiss-type mini dairy-breed bloodlines.

Nigora Goats are small-sized to medium-sized. On average, their height falls within 19 to 29 inches.

Both genders of the breed are horned, and their coats come in many colors, including black.

Nigora goats are friendly and calm. So, it is no surprise that some people keep them as pets. But when not being kept as pets, Nigora goats may also be reared for milk and fiber.

The cashmere type is made up of short cashmere fiber. The angora-type mohair is long and shiny. Then there is the cashgora type, which is a medium-length combination of mohair and cashmere fiber.

Orobica is an Italian goat breed. More specifically, it is native to Val Gerola in Sondrio, Italy.

Orobica is one of the 8 earliest Italian breeds, and it was first documented at the start of the 20th century.

Orobica goats have coats with shiny, long hair. The coats come in various colors, including grey, black, beige, and brown.

Orobica goats have erect ears. Both genders are horned, and their horns are long. Orobica goats are mainly dairy goats. But they may also be kept for meat.

Goats of the Orobica breed are hardy. In fact, their hardiness allows them to reach mountain pastures in areas not readily accessible.

The Rove Goat is a French breed. It is native to Le Rove, a village close to Marseille in Southern France.

The coats of Rove goats are smooth with short, thick hair. They commonly come in plain black or red but they can also be patterned with white, grey, red, and black.

One of their distinguishing features is their long-twisted horns, which can measure up to 4.5 meters.

At the start, Rove goats were mainly bred for meat. But these days, they are primarily kept for milk. On average, they produce up to 600 liters of milk in a year.

Rove goats might not be the best dairy goats. But they produce milk that is thicker and creamier than that of many other breeds.

Generally, Rove goats are hardy. They do well in areas with low rainfall, and they thrive even in scarce vegetation.

Sahelian Goats are a breed from West Africa. They are a part of the Savanna group of goats found across the Saharan and sub-Saharan region.

Sahelian goats have slender, narrow bodies with shallow chests. Both genders of this breed have horns, and they are kept mainly for meat and skins. But they may also be reared for milk.

Sahelian goats are small-sized to medium-sized.

Valdostana is a domestic goat breed from Aosta Valley, Italy.

Goats of this breed are generally large; the does have an average height of 29 inches and 143 pounds, while the bucks are typically as tall as 31.5 inches and 187 pounds.

Valdostana goats come in coats of various colors, including black, ash-grey, and brown. Both genders have horns, although the horns in bucks are usually longer.

Valdostana goats are a dual-purpose breed. They may be reared for meat or milk, and the milk is usually used in making cheese.

Verata goat is a domestic breed from Vera, Spain. Goats of this breed are smaller than average, and they are commonly found in Vera.

The average Verata goat is as tall as 28 inches and weighs up to 154 pounds. However, the does may be slightly shorter than the bucks.

Verata goats come with coats that have shiny, short hair. Their coats are usually black, but they may also be grey or chestnut.

Verata goats have horns which twist outward and forward. Both genders can have beards, but this feature is more common and prominent on the bucks.

Verata goats are a dual-purpose breed. They are usually bred for meat and milk. The average doe produces up to 150 liters of milk in 175 days of lactation. *This post may have affiliate links, which means I may receive commissions if you choose to purchase through links I provide (at no extra cost to you). As an Amazon Associate I earn from qualifying purchases. Please read my disclaimer for additional details.. Some goats come with solid-colored coats, while others come with multicolored coats…. 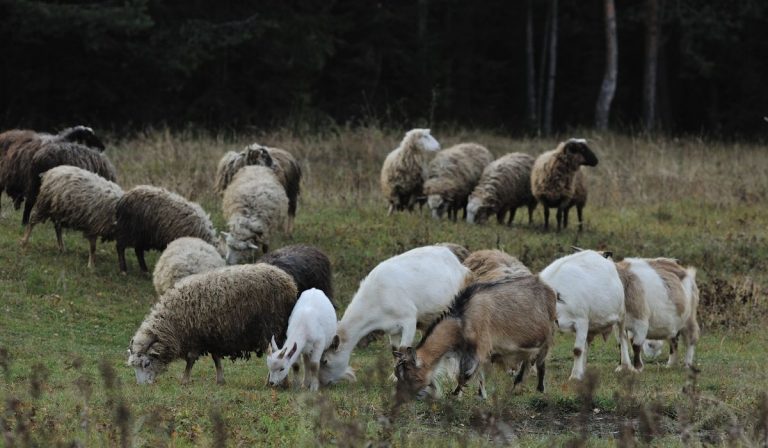 *This post may have affiliate links, which means I may receive commissions if you choose to purchase through links I provide (at no extra cost to you). As an Amazon Associate I earn from qualifying purchases. Please read my disclaimer for additional details.. Small livestock farms are the new normal for many people across the… *This post may have affiliate links, which means I may receive commissions if you choose to purchase through links I provide (at no extra cost to you). As an Amazon Associate I earn from qualifying purchases. Please read my disclaimer for additional details.. Most farmers, breeders, or anyone who loves goats raises them for meat… *This post may have affiliate links, which means I may receive commissions if you choose to purchase through links I provide (at no extra cost to you). As an Amazon Associate I earn from qualifying purchases. Please read my disclaimer for additional details.. Everyone should have a pet. Pets are not just fun to see,… 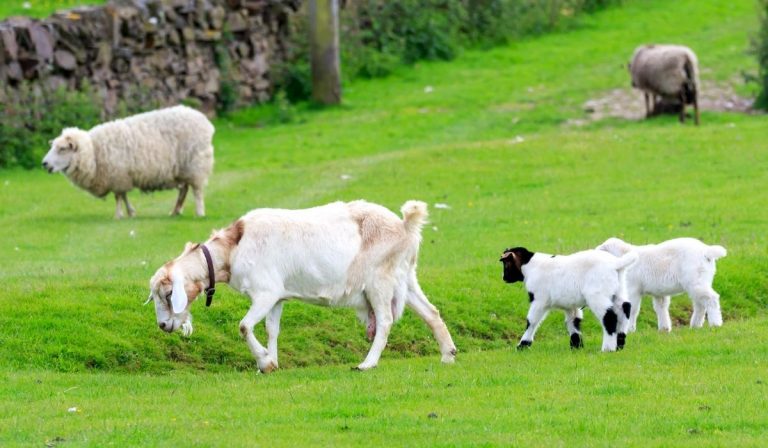 *This post may have affiliate links, which means I may receive commissions if you choose to purchase through links I provide (at no extra cost to you). As an Amazon Associate I earn from qualifying purchases. Please read my disclaimer for additional details.. Have you been looking for the perfect goat? Maybe inspired by your…