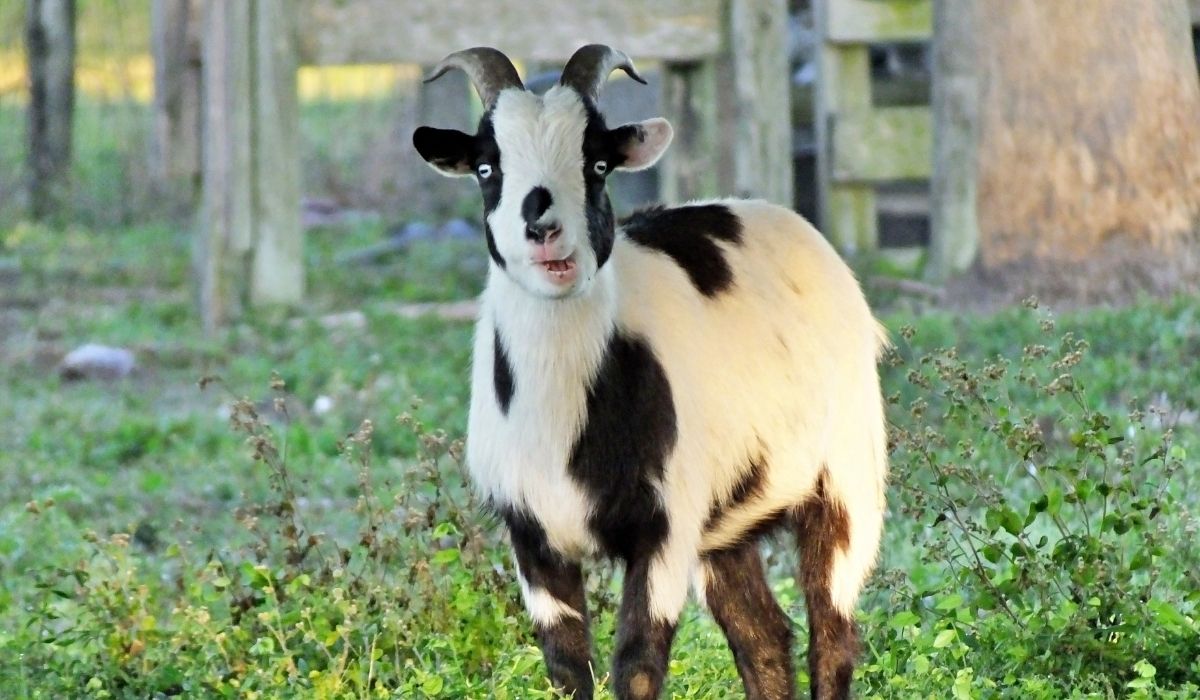 Amongst the many color combinations in goats with multicolor coats, there is the monochrome combination – black and white.

The combination of both colors (black and white) comes in various patterns. It could be patches, stripe, or even spotted.

In this article, we explore some goat breeds with black and white coats. Here is a rundown of their origins, size, uses, and fertility, amongst other features.

Their root is traceable to the voyages of European explorers on the island of Arapawa, New Zealand.

According to records, Captain James Cook left some goats on the island on one of his expeditions. The goats in reference are the ancestors of the Arapawa Goat breed.

Arapawa goats are small-sized. Mature does typically measure 24 to 28 inches from the withers while mature bucks measure 26 to 30 inches.

On average, Arapawa goats weigh 60 to 125 pounds, with the bucks leaning on the heavier side of the range.

Both bucks and does of the Arapawa breed are horned. While the does have rounder, shorter horns, the males have flat, extensive horns.

Arapawa goats come in coats of varying colors and patterns. They can be brown, white, black, or fawn, and they can also be a combination of these colors, including black and white.

Goats belonging to the Arapawa breed are kept primarily for their meat and milk. But since they are friendly animals, they may also be kept as pets.

Arapawa does are prolific mothers. It is not uncommon for them to birth twins. Despite this, the breed is currently listed as a rare breed.

Bagot goats are ancient goats believed to have been around since the 14th century.

The breed is named after the man who reared the first identified Bagot goat, Sir John Bagot of England. The actual origin of Bagot goats is not known.

Bagot goats are small-sized to medium-sized. Both genders are horned.

The horns of the bucks have huge sweeping curves, and they are set wider while the does have straight or slightly backward-curved horns.

Their coats are typically black and white. The head and forequarters are usually the black part, while the hindquarters are white. In some, you may find a white blaze too.

Bagot goats are primarily used for meat and vegetation control.

Bhuj goats are native to northeastern Brazil. However, they were bred from the Kutchi goat breed of India.

Their coat is predominantly black, but their ears are white with tiny black spots, and they have roman noses. So, they qualify as a black and white goat breed.

Bhuj goats are bred primarily for slaughter and for milk production.

The British Alpine came from a line of goats that included Alpine goats and local goats.

It was developed early in the 20th century in Britain and is currently a dairy breed.

British Alpine goats are pretty large-sized. The Does stand as tall as 32 inches, while the bucks measure 37 inches.

Both sexes may be horned or polled.

British Alpine coats are typically short, glossy, and thin. However, some bucks may have long hairs.

They are predominantly black, but some may have white Swiss markings on their faces, legs, and thigh region.

The markings may fade as they get older.

While they are hardy, British Alpine goats do not thrive in areas with high humidity. They are best suited for temperate regions.

As said before, they are bred for milk, and they really thrive at milk production. The Does sometimes lactate for up to 2 years, and even during the cold months, they keep producing milk.

The milk from British Alpine Does is rated highly, and it contains around 3% to 4% fat.

Fainting goats get their name from the response they elicit when startled.

In response to a scare, the muscles of Fainting goats contract and remain that way. So, they fall. This response is a hereditary disorder called myotonia congenita.

This breed is native to the United States. However, its ancestry is not known. Fainting Goats exist in two strains, most of which are in Tennessee.

Fainting goats are relatively small. They have coats that come in various colors. But black and white types appear to be the most common.

The combination of black and white in Fainting goats comes in a few ways.

The primary purpose for breeding Fainting goats is for meat. But they may also be kept as pets and for accompanying herds.

If a predator shows up while they accompany a herd, they will get startled and fall. This will drive the predator’s attention to them while the other animals make a run for it.

The Icelandic Goat may also be referred to as the Settlement Goat. It is a breed that has been around for quite a while – over 1000 years.

The Icelandic Goat breed is reported to have been brought into Iceland by settlers from Norway.

Late in the 19th century, the Icelandic Goat breed almost went extinct. However, it was recovered before the second world war. Currently, the Icelandic goats are listed as rare.

Icelandic goats are small-medium. The bucks typically weigh 132-176 pounds, while the does weigh 77-132 pounds.

The coats of Icelandic goats consist of high-quality cashmere fiber. It comes in various colors, including black and white. But the most common appears to be plain white.

Icelandic goats are bred for various purposes: milk, cashmere fiber, meat, and skin. They may even be kept as pets.

During an average lactation period, Icelandic goats yield around 150-200 liters of milk.

The Maltese goat breed was named after the island of Malta. It is a breed of medium-sized with origins in Asia Minor.

Maltese goats usually do not have horns. The bucks weigh more than the does, with an average weight of 154 pounds against 101 pounds.

The average height in Maltese bucks is 34 inches, while that of the does is 28 inches.

Maltese goats have long-haired coats with predominantly white fur. But their heads and ears are colored black.

One standout feature in Maltese goats is their ears that turn outward at the apex.

Maltese goats are primarily milk goats. Over a single lactation period, the does can produce up to 1322 pounds of milk.

Their milk is of high quality, containing 3.7% protein and 4.3% fat. Maltese goat milk is pleasant to taste, and it does not have a prominent goat-like flavor.

Peacock goats came from the Swiss Mountains. They are a domestic breed of goats that have been around for a very long time.

Peacock goats are medium-sized. Bucks can be as heavy as 165 pounds, while does are usually 123 pounds.

Most of the coat of a Peacock goat is white. But the legs and face have black markings and the hindquarter is predominantly black. Peacock goats are horned, and they may also have beards.

Peacock goats are mainly bred for milk. Their milk production matches that of many other mountain goat breeds. However, their milk is not one of the best.

Besides being bred for milk production, Peacock goats may also be kept for slaughter.

The name of this breed comes from a combination of white Angora and Pygmy – the name of its parent breeds.

Pygora goats are a United States breed. They were created in the 1980s to produce fiber.

Pygora goats are small-sized. The bucks weigh 75-95 pounds on average, with an average height of 23 inches. The does measure 18 inches in height and weigh 64-75 pounds. Both genders are usually hornless.

The coat of a Pygora goat comes in various colors including, black, white, brown, and grey. It may also come in a combination of the said colors.

Besides being bred for fiber, Pygora goats may also be reared for milk production. On average, they produce 1 liter of milk per day during lactation.

Sarda goats are indigenous to the island of Sardinia in the Mediterranean off the central Italian west coast.

This breed is one of the 8 autochthonous Italian goat breeds.

Sarda goats are medium-sized. They have long necks, medium build, and deep chests. The bucks weigh up to 147 pounds while measuring 30 inches in height.

For the does, the average weight is 110 pounds, with an average height of 27.5 inches.

Sarda bucks and goats may be horned and bearded. Their coats come in various colors, including black and white.

Sarda goats are a dual-purpose breed. They may be reared for milk or for their meat. *This post may have affiliate links, which means I may receive commissions if you choose to purchase through links I provide (at no extra cost to you). As an Amazon Associate I earn from qualifying purchases. Please read my disclaimer for additional details.. Potatoes are one of the most common vegetables in the world. In… *This post may have affiliate links, which means I may receive commissions if you choose to purchase through links I provide (at no extra cost to you). As an Amazon Associate I earn from qualifying purchases. Please read my disclaimer for additional details.. Raising goats can be a truly rewarding experience if you select the… *This post may have affiliate links, which means I may receive commissions if you choose to purchase through links I provide (at no extra cost to you). As an Amazon Associate I earn from qualifying purchases. Please read my disclaimer for additional details.. Of the many possible coat colors in goats, brown is one of… *This post may have affiliate links, which means I may receive commissions if you choose to purchase through links I provide (at no extra cost to you). As an Amazon Associate I earn from qualifying purchases. Please read my disclaimer for additional details.. Goats can and most likely will eat just about anything herbivores can… 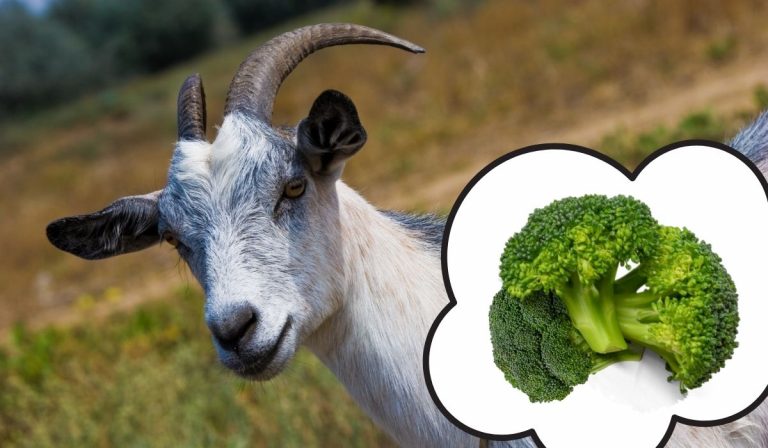 *This post may have affiliate links, which means I may receive commissions if you choose to purchase through links I provide (at no extra cost to you). As an Amazon Associate I earn from qualifying purchases. Please read my disclaimer for additional details.. Goats are animals with a pretty strong digestive system that allows them…