I admit to being a science fiction and fantasy nerd.

Perhaps not what one might expect as an opener for this post, given the title, but it’s related – bear with me for just a moment.

In the BBC series, “Torchwood,” one of the main characters (Jack Harkness) stands in the rain and remarks, “I can taste it! Estrogen. Definitely estrogen. Take the pill, flush it away, it enters the water cycle. Feminizes the fish. Goes all the way up into the sky then falls all the way back down onto me. Contraceptives in the rain. Love this planet. Still, at least I won’t get pregnant. I’m never doing that again.”

Let’s not go into the whys and wherefores of how a male character might get pregnant and focus instead upon the content of his remark – he can taste  birth control pills in the rain falling from the sky.

Before you think, “ok, she’s completely divorced from reality, if she takes that as fact,” let me link you to an article outlining a study which found significant amounts of birth control pill hormones in the ocean: http://findarticles.com/p/articles/mi_m0CYP/is_4_111/ai_102102864/

Many of the drugs we consume end up in our ground water, sewer systems and ultimately the oceans. With this in mind, I limit my medication intake to those things I really need to be healthy. I try not to take pain killers, but do pop the infrequent Ibuprofen for a monster headache. I look for natural remedies as much as possible, but I’m really just in the beginning stages of my education.

When I’m not eating as well as I should be, I get really awful heartburn. The kind that bubbles up in to my esophagus and lingers, coming in wave upon wave. The pain is not incapacitating, but, as anyone who has experienced it can attest, it’s vastly unpleasant.

The remedy that works for me is simple: A few tablespoons of apple cider vinegar in a glass of water, which I drink as quickly as possible. 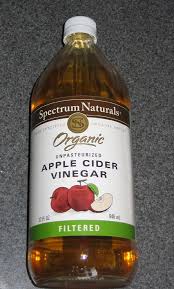 Fun? Not really. I love balsamic and other vinegars in food, but straight-up or in water? Not much of a fan, to be frank.

Still, within twenty minutes of consuming this counter-intuitive beverage, most of my symptoms will be gone.

How does drinking vinegar, an acid (acetic acid, to be specific,) help with an acidic stomach? How does that even make sense?

Our Friend, Chemistry, has all the answers. Rather than drag you through the formula, I’ll just say this – Neutralization of an acid leaves a salt and water. The various molecules of acid, water and other substances in the stomach swap bits and bonds and come up with something entirely else. Nature has the most amazing processes. 🙂

If you’re curious about these processes, here are a couple of links explaining:

Even if you’re not curious, give this old-time home remedy a shot next time before you reach for the over-the-counter antacid – that is, unless you’re really averse to the taste or smell of vinegar.

It’s natural, it’s non-addicting and it isn’t something you’ll “build up a resistance to” over time. It just works – simple science.