Falling Upon the Grenade

Internet, I want you to feel you can rely on me, trust me.

I want you to know I am fully willing to throw myself upon the grenades that may endanger you. Grenades such as “testing chocolate cake mixes so you know whether they’re delicious.”

Internet, I am here for you.

It was with you in mind that I bought, prepared and consumed a Betty Crocker Gluten-Free Devil’s Food Cake mix. Just for you.

Oh sure, I also wanted to show my support to both Betty and the local D&W Spartan store for making such a mix available, but my primary focus? My chief motivation? It was you. I promise.

Normally, I would be one of the last people ever to recommend buying, let alone eating, a commercially-produced cake mix. There are vast quantities of chemical and filler stupidity in those mixes we’re all better off without, not to mention it’s not much more difficult to make a cake from scratch – until you enter the bizarro world of gluten-free-fricking-baking.

But I put aside those little quibbles, Internet, so I could review the mix for you.

Yes, I am this selfless.

I admire such bloggers as Gluten-Free Goddess and Gluten-Free Girl, who whip up gluten-free recipes with apparent ease and finesse. But the ingredients are ridiculously expensive, and do most of us even have amaranth flour in our pantries? Honestly. Sometimes you just want cake and you want it now, and you don’t want to go to the store to buy 5 different kinds of expensive flours. Am I right? Yes, I am.

So maybe you buy one or two boxes of the GF pre-made mixes for just such emergencies. If you are a normal person who has a healthy relationship with food, you very likely will let that box of cake sit there until the emergency strikes.

If, however, you are me, the mere presence of the box constitutes a continuous There Is A Cake Mix in My Cupboard full-blown crisis, which demands the cake be eaten immediately. I held out for almost 3 weeks, people – this may be a new record. I’m not going to talk about the frosting. 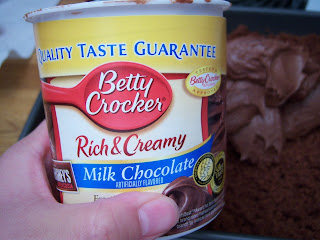 Ok, it was barely an hour after I brought it home that I cracked the lid and went at it with a spoon briefly. And then an hour later, I did it again. And then for a bedtime snack. And so on, and so forth, for the next, oh, probably four or five days, after which point I realized, “holy shit, I have just eaten an entire can of frosting.”

So much for weight loss that week.

I was intensely skeptical about this cake. My previous cake experiences with boxed mixes has largely been pretty ho-hum. They aren’t rich or chocolatey enough, or they’ve got weird stuff in them.

With the gluten-free mix I had tried in the past, the end result was incredibly meh. My problem with most gluten-free baked products usually ends up being texture. And flavor. Which, of course, are two of the best things about food.

Well, our old friend Betty really surprised me with this one. The batter, usually my favorite part of cake, was fairly bland and uninspired. After baking and cooling, though? Wow – yummy!

I had a tiny square before I frosted the thing, and it was very tasty. The texture was not mealy or grainy, and it was moist and spongy. The flavor was not cardboardy at all. I would have added more cocoa personally, but that’s just me.

I definitely would not have pegged this as a gluten-free, store-bought cake mix at all.

After frosting, it was amazing. So amazing, in fact, I had to bring it in to work with me today, lest I stand there in the kitchen with a fork madly consuming the whole pan.

A couple of worthwhile notes:

The ladies here are enjoying this tasty treat, and would never have guessed it’s GF, either. It is far superior to the Gluten-Free Pantry Decadent Chocolate Cake mix, which was dry and had an odd texture.

So, on the whole, I have to say I’m a fan of Betty’s GF work here. Color me absolutely shocked.

My recommendation is to give it a shot if you’re craving easy and delicious gluten-free chocolately goodness.

Or, if you, like me, merely want to provide good information to your friends and are willing to go to considerable lengths and make great personal sacrifices to do so. 😉

3 responses to Falling Upon the Grenade