Lately, there’s this series of epic, Olympic struggles in my head… vast, sweeping Life Issues. As I understand things, this often comes with this time of life – turning 40 in 9 months, omg – so the ponderings themselves aren’t a surprise, but the content of them surely is.

This is just me rambling on and sorting things out in my mind. I think better when I write and see words on a page. This isn’t about sewing or quilting – it’s about one of my flavors of ethics.

I’ve been vegetarian since 2004, although to be fair, I only gave up fish and seafood in 2007. I occasionally have passing cravings for meat, especially if I can smell something delicious cooking, but I’ve never really been faced with Rasputinesque, tortuous, HOLY CRAP GIVE ME A BITE OF THAT CHICKEN BREAST LEST I PERISH urges.

Not until I started living with a carnivore. Mike isn’t vegetarian, and I don’t plan to try to turn him into one. I even buy locally-grown, humanely-raised-and-slaughtered whole chickens for him, and roast them up. The last couple have me seriously questioning This Whole Vegetarian Thing. Talking to our friend Justin, who has recently become vegetarian himself, he asked me to harken back to why I became vegetarian in the first place.

I’m not a vegetarian because I hate meat, or because I think it’s unhealthy to eat. I love meat; there are few things as tasty as a slowly roasted, herbed chicken breast, or a thick, bloody-rare steak. Humans evolved as omnivores and meat has a place in our diets – a large place. I recognize I am probably making things a bit harder on my body by not consuming the flesh of animals as nature intended. I am not a member of PETA; I recognize their good work and their ill deeds. I am an environmental conservationist. I am, in nearly all ways, incredibly on the left side of the political scale… but I don’t think I am irrational about any of it. I see opposing viewpoints as valid – I simply disagree.

Naturally, giving up delicious meat wasn’t something I was dying to do. My friend Wendy is vegetarian, and while we were working together at Wolf Haven, she encouraged me to read this book: Dominion: The Power of Man, the Suffering of Animals, and the Call to Mercy. 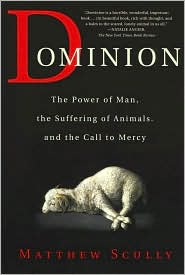 This book absolutely changed my life. I grew up in a small Michigan town, where farm animals have, y’know, farms to live upon. With sunlight and pastures and clean barns and stalls. They have pretty good lives. I grew up believing that is where our meat comes from.

This is so not true, not true at all. 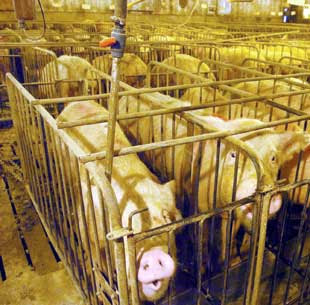 When I read Scully’s book and learned about factory farming, the absolutely wretched and cruel conditions therein, and their impact on the environment, becoming vegetarian came quickly and easily. I remembered when my mom told me what meat was, and my response as a three- or four-year-old child: “You mean, we eat...cows?!” I was stunned, appalled, shocked, dismayed, horrified.

Thirty years later, once I saw the reality of what we were doing to these animals, these helpless, absolutely helpless creatures… I couldn’t bear it. I couldn’t stand to be a part of it. I was done. My money would not go to this suffering.

On a practical level, why would I want to eat meat that was constantly under assault from adrenaline? These animals are often in constant pain or discomfort, they are frightened and abused – surely the chemical composition of the meat is altered.

I have always loved my animals friends, and cruelty to animals is, in my eyes, one of the most reprehensible acts. Factory farming aside, I feel better not eating the creatures I love. While I respect in the highest people who can raise and slaughter their own meat, I am not capable of doing so myself. I couldn’t live with an animal, form bonds with it and then one day (out of the blue, as far as the animal was concerned,) kill it and eat it. For me, that would be a betrayal of intimate trust. I understand not everyone feels this way, and, as I said, more power to the people who can do it, or who can hunt. I can’t do it, so therefore, I don’t eat meat.

Having found a local, humane farm, though… the decision is less black-and-white. The chickens have a normal, chicken life. The owners take care to ensure their lives and deaths are as decent as possible; they’re dedicated to providing healthy lives for all of their animals. Where do I stand on this?

There is also the minor issue of my casual Buddhist nature. I am probably The Worst Buddhist Ever; I don’t meditate, I don’t read the texts, and I don’t really believe in the various deities as anything more than symbols. I am only casually acquainted with the Dharma. Yet, the basic tenets of this path appeal to me – the logic, the science, the search for the truth and understanding, the lack of blind devotion to an omniscient God, the compassion, the love. My apathy is what stands in the way of me being a better Buddhist, but that’s another post entirely.

Buddhists are generally vegetarian, but even the Buddhist monks do not turn down meat when it is offered to them. As beggars, they are not choosers, and they eat what they are given. His Holiness the Dalai Lama eats meat, if it was not expressly killed for him – at least, so I have read.

If I remove the religious issue and the factory farming issue… where does that leave me? People frequently ask me about being vegetarian, and many of them are unaware, as I was, of how devastatingly cruel factory farming is. I’ve had quite a few interesting conversations at work with people who say they’ve thought about it, or they used to be, even a few who currently are. No one has ever been disrespectful of my views, perhaps because I am not disrespectful of theirs. It’s a personal choice. While I would love to raise the American consciousness about where our food comes from, knowing wouldn’t convince all of us. Some view animal suffering as just the way things are – we are the top of the food chain, and we can do what we wish.

It’s that strong belief the book I mentioned above addresses. Written by a devout Christian, the book deeply explores the concept of “dominion,” and what it means. It does not mean, as so many of us take it, “domination.” Scully argues when God gave man dominion over the earth, he was giving us the responsibility for taking care of it, for being an overseer, a caretaker – not an evil Sheriff of Nottingham.

I wouldn’t be struggling so much, I think, if I’d been spending time with chickens lately, and getting chickens in the spring will probably ease these cravings as I reacquaint myself with their personality and charm.

Next up – CHILDREN! Why I’ve never wanted them, and why am I suddenly possibly reconsidering that deeply-held idea, and why I am absolutely terrified to even be considering this at all.